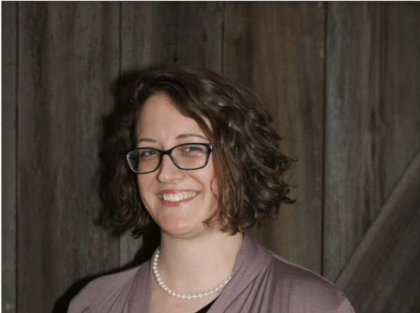 The Unitarian Universalist Society of Amherst is pleased and excited to announce our settled minister, Rachael Hayes!

Rachael grew up in Kentucky and attended a mixture of Catholic and public schools. In high school, she got involved with the drama club and was hooked, leading her to earn a Bachelor of Arts degree in drama at Bennington College in Vermont, where she discovered a love of directing. After stints in Ann Arbor MI and Washington DC, she moved to New York to work in theater, where she gained experience in the managerial aspects of running a not-for-profit organization.

As years passed, Rachael realized her true calling was UU ministry. She went on to receive a Master of Divinity degree at Union Theological Seminary. While there, she served as a chapel minister in the seminary worship office, developed a collaborative worship community, and completed an internship as Youth and Young Adult Coordinator for the UU Metro New York District. Most recently, she served the Unitarian Universalist Fellowship of Boca Raton, FL, first as Ministerial Intern, and then as Summer Minister while she completed her Clinical Pastoral Education as a chaplain intern in a hospice inpatient unit.

On June 9, 2019, Rachael will be ordained at her home congregation, Fourth Universalist Society in the City of New York at 5PM. Members and Friends of UUSA are welcome to attend. Her settled ministry will begin in August 2019.